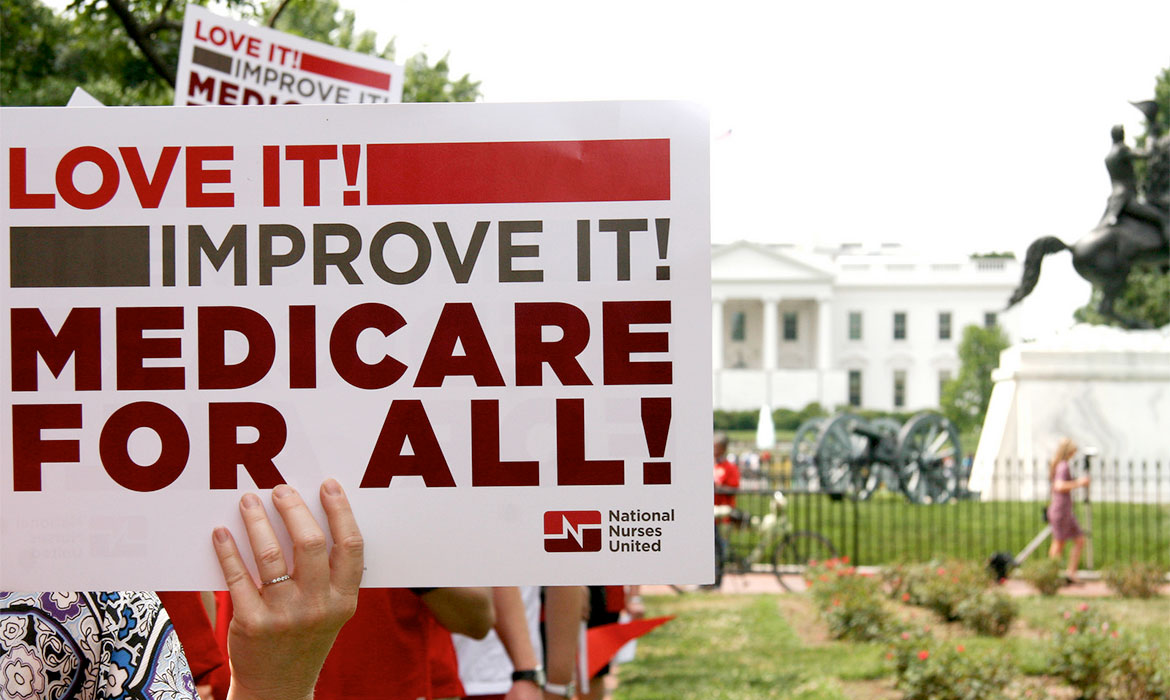 Before President Trump’s next commentary on healthcare, he ought to talk to Kate Weissman. Just 33, lean, athletic, and strong, Weissman, whose story was told by CNN in August, had to fight for her life after being diagnosed with cervical cancer. (1)

While enduring standard chemotherapy and radiation, her biggest fight turned out to be with her insurance company, one of the largest and most profitable in the U.S., which refused to pay for the specialized treatment recommended by six prominent oncologists. Weissman was only able to get the life-saving treatment when her parents pulled $95,000 out of their retirement savings.

Kate Weissman is hardly alone. A September Kaiser Family Foundation survey found healthcare the second most important issue to voters heading into November. (2) Their biggest concerns were, in order, being able to afford surprise medical bills (like the one facing Weissman), escalating insurance deductibles, prescription drug costs, and monthly premiums.

Nurses have long campaigned for ending disgraces like this with an improved and expanded Medicare for all. We see the patients forced to make painful choices between the critical care they need or paying their housing or heating bills, even parents who’ve become homeless to pay for care for a sick child.

We care for the patients who forgo chemotherapy or colonoscopies their doctors recommend and the patients with elevated blood glucose levels because they can’t afford the medication to control their diabetes. And, we’ve seen enough.

Tens of millions of people are worried sick about what will happen to them when they get sick. Medical bills today account for one third of all GoFundMe campaigns. (3)

Even those who still have employer-paid health insurance have seen their costs go through the roof. Family premiums have soared 55 percent since 2008, with the amount cost shifted to workers up 65 percent, far exceeding wage increases. Add to that average deductibles which have skyrocketed 212 percent the past decade. (4)

While the Affordable Care Act secured important gains, especially in coverage in those states that embraced Medicaid expansion, for far too many our healthcare system is in free fall.

We spend well more than any other nation in per capita healthcare spending, yet trail many other wealthy nations in critical health barometers, including life expectancy, deaths from preventable diseases (5) and infant and maternal mortality. Those other nations have embraced some form of a national healthcare system, like our Medicare, and even where some problems remain, those systems remain wildly popular with politicians suggesting cuts at their own peril.

People have increasingly concluded that market approaches are failing their health and their economic security. They want real change — and 70 percent now favor Medicare for all. (6)

That’s the reason growing number of candidates have endorsed Medicare for all, and why those who continue to cling to the profit-focused present system, are desperate to discredit the most comprehensive cure for our healthcare crisis.

In his recent op-ed, President Trump resorts to tired fabrications and fear mongering about what Medicare for all would look like. As a Washington Post fact checker has explained (7): Medicare for all will not slash Medicare for seniors and the disabled, but improve it by covering vital services not in the present system, notably dental, vision, and hearing aids while reducing escalating out-of-pocket costs. No one will lose access to their favorite doctors or hospitals; Medicare for all expands patient choice which our present insurance system restricts through increasingly narrow networks. There won’t be “massive rationing” – everyone is guaranteed care when they need it under Medicare for all, as opposed to the real rationing built into the present system in which 40 percent of respondents to a March survey say they’ve skipped medical treatment or diagnostic tests the past year due to cost. (8)

Even the rhetoric over costs has been overblown. Yes, federal spending would increase, but a study the libertarian Mercatus Institute sponsored inadvertently let the cat out of the bag. Medicare for all would save some $2 trillion over ten years over what we, as a nation, spend today on healthcare. (9)

We can no longer accept a healthcare system that puts a premium on profits over patient care.  Medicare for all is more humane, promotes continuity of care and prevention. It restores the notion of community and caring for each other rather than a ruthless you’re on your own abandonment. And, 70 percent of people in this country agree with us.