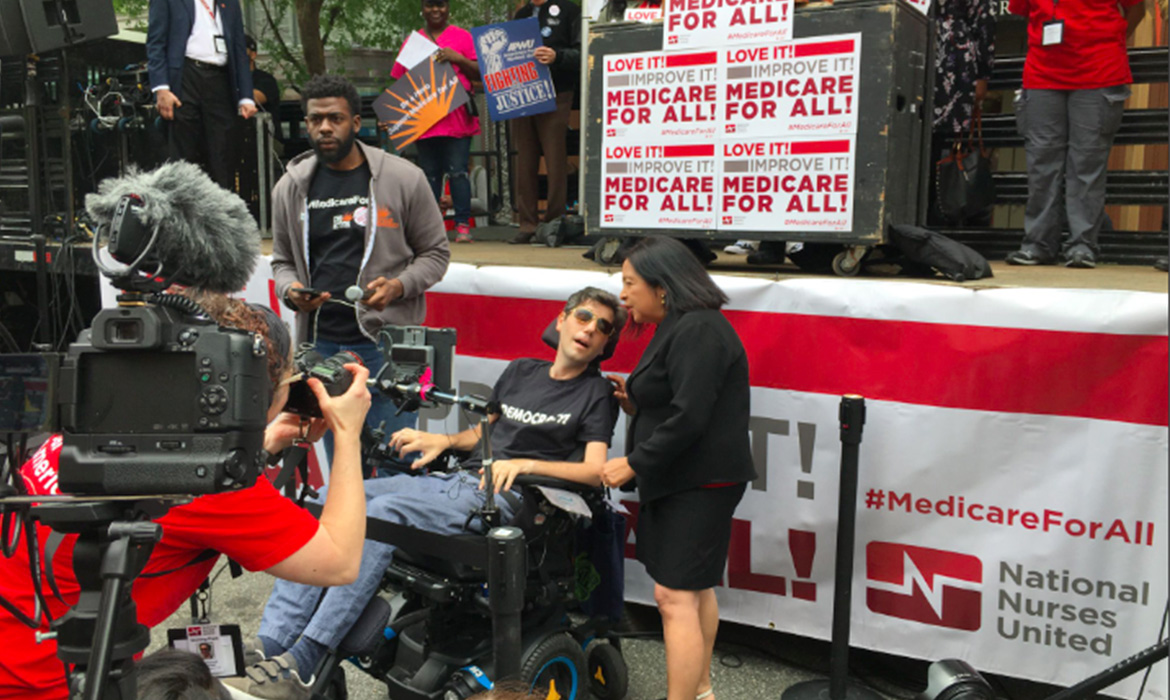 I recently sat down with Medicare for All activist, ALS patient, and honorary nurse Ady Barkan to talk about his new health care interview series with Democratic candidates. It’s not every day that nurses, who are duty bound to protect our patients — experience a patient fighting just as hard to protect us. But it’s not every day that we meet someone like Ady Barkan. A lawyer, activist, co-founder of the Be a Hero PAC, and organizer for the Center for Popular Democracy, Ady was diagnosed with ALS in 2016. He has spent the past few years — the precious time he has left — being an incredibly powerful voice in the people’s movement for Medicare for All. In his latest project, “Uncovered: Health Care Conversations with Ady Barkan,” Ady sits down with every major Democratic presidential candidate, and accomplishes something I didn’t know was possible. He gets the candidates off script, their voices cracking with emotion. It’s impossible to use jargon on a dying man, so their talking points no longer apply. And that is one of Ady’s many super powers. This spring, I wrote about how floored we nurses were to hear his game changing testimony in the first-ever Congressional hearing on Medicare for All. To be honest, I didn’t have high hopes the Rules Committee hearing would do much to advance the H.R. 1384, the Medicare for All act of 2019 — until I heard Ady speak. With the help of a special computer, he told his story of not only struggling with the effects of ALS, as a young father, at the prime of his life, but also suffering from outrageous medical bills and spending hours of the precious time he should be spending with his wife Rachel and his son Carl — fighting with his insurance company. That was it. There were no slick talking points that could obscure Ady’s real-life example of how our profit-driven system is irreparably broken. Ady did what nurses do: brought the focus back to real human beings. So when Ady and Be a Hero came to National Nurses United with a plan that had emerged from the hearing — an idea for Ady to invite every major Democratic candidate to sit down for a personal conversation on health care — we could not have been more excited to partner with him on the project. I was honored to have the opportunity to personally sit down with Ady, reviewing the highlights of the series and sharing my thoughts on the movement. You’ll hear me say in this video that nurses have been in this fight for decades because we refuse to be complicit in a system that puts our patients in jeopardy. And we know that ANY system that maintains a role for private insurance, for-profit hospital corporations, and Big Pharma will always jeopardize patients. “Uncovered” is so brilliant because it caught candidates grappling with how to say their platforms really were the best for people, if they still involved for-profit insurance. Ady’s presence had a way of making the value of healthcare as a human right obvious and not something that could be argued. So candidates were in this rare position of having to scramble a little bit to convince him that their plans really would provide health care for everyone. Ady Barkan is not just nurses’ brother and ally, he is truly one of us. It was so moving to sit down with him, because I know that one day, when we have Medicare for All, his name will be in the history books. His call to “Be a Hero” is a rallying cry for our grassroots movement, and I personally feel more inspired than ever to keep fighting, seeing how fiercely this incredible man can care about building a better world. We love you, Ady.
previous post