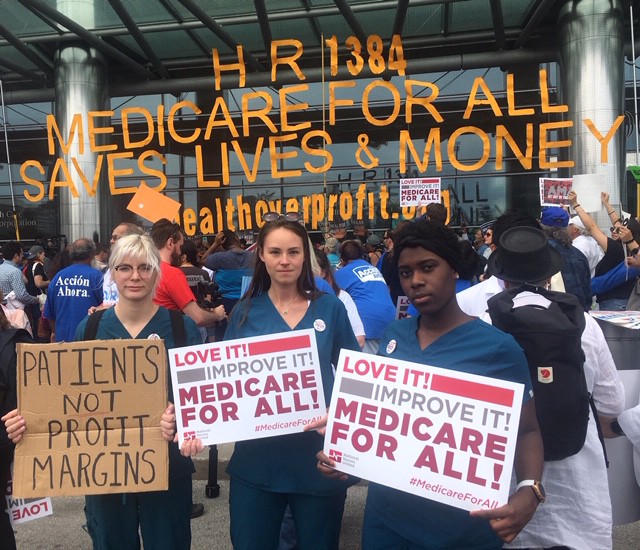 As the House Ways and Means Committee prepares to hold an influential hearing Wednesday on HR 1384, the Medicare for All bill authored by Reps. Pramila Jayapal and Debbie Dingell, with 112 House cosponsors, news reports remind us every day of why the bill is so necessary.

Just ask Caitlin and Corey Gaffer of Minneapolis who, with their first child on the way, unexpectedly learned that their health insurance had been cancelled for “non-payment” for a series of bureaucratic snafus even though they had paid their premium.

The problem was eventually resolved, but not before they were slammed with an unexpected additional $30,000 in medical bills and had “racked up lots of stress” while Caitlin was navigating a complicated pregnancy, as Kaiser Health News reported.

The Affordable Care Act, many believed, prevented insurance companies from kicking people off their insurance. But still, KHN noted, “tens of thousands of Americans each year — exact counts aren’t available — are dropped by their insurers over payment issues, sometimes with little or no prior warning from their insurers.”

Then there’s Andrew Heymann, the Hackensack, NJ accountant who suffered a deeply gashed ankle while helping a neighbor move a large glass table. He went to the emergency room where they quickly stitched him up.

“We’ve received literally thousands of stories from consumers all over the country that are having this problem,” a Consumer Reports representative told PBS. In a survey last year, 30 percent of Americans with “insurance” said they’ve been hit with surprise medical bills, according to Consumer Reports.

For every report — like these two published accounts and the one-third of GoFundMe campaigns that are launched due to unpayable medical bills — there is the daily less reported experience that people have with their “insurance” even when dutifully paying their premiums, their copays, and still having to meet their ever-increasing deductibles.

The doctor or doctors you regularly see, the doctor’s office you regularly visit, the nearest hospital you rely on, are “in network” — until they are not. Every year your insurance company may change the medical group or hospital and other providers it has a contract with, and you have to start over and search for doctors and other providers. Or the only specialist you need is not “covered” and you have to go miles away to find one who is.

Or you go to the doctor and are prescribed medication, or told you need a diagnostic test, or referral to a specialist. But there’s a catch. First you have to wait until it is “authorized” by your insurance company. And then you might spend hours on the phone negotiating with your insurance company, and the billing office at your medical group, your doctor’s office, or your hospital getting that approval.

This is the system we have today. People endure the bureaucracy and hassle even if they are among the “insured,” even if they have really good employer-paid “insurance,” and even if their out-of-pocket costs for that really good insurance goes up and up every year.

But somehow the policy wonks, the experts quoted in the press, and too many politicians of both parties, tell us that Americans love this system and it would be too costly or too complicated to change it.

That it is just not politically feasible or expedient to have a system that will actually guarantee you can get health care, not access to “insurance,” when you need it, where you need it. Without having the worry of sudden cancellations of your “insurance,” surprise medical bills, or spending hours trying to get the actual coverage you pay for, or having to exhaust your savings or skip other basics if you get really sick.

Why? Because the existing system reinforces a health care industry structured to generate profits, not to actually take care of people. Leaving commercial insurers in charge of our health will continue to fail patients, exactly why Medicare for All is the only solution that will guarantee health care as a human right in the U.S. as in so many other wealthy nations.

Millions of people are demanding change, and tens of thousands are engaged in mass action building an undeniable movement to press policy makers to make that change happen. That’s why there is a hearing Wednesday on Medicare for All. And we’re still just getting started.