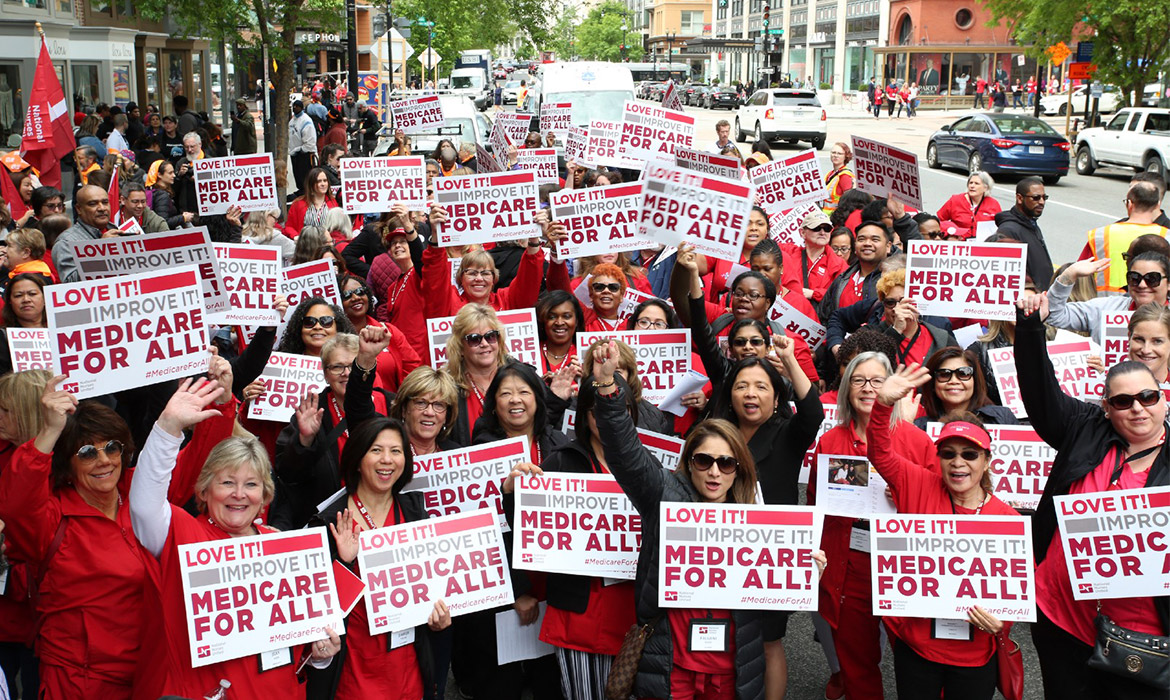 If you still wonder about the growing popularity of the movement for Medicare for All, consider this simple question @AllOnMedicare, one of the more active social media advocates of Medicare for All, posed on Twitter May 2 — “When did you become radicalized by the U.S. health care non-system?”

When did you become radicalized by the U.S. health care non-system?

In short order, the tweet generated well over 4,000 re-tweets over 12,000 likes with more still coming in. The stories it prompted could fill a text book for why we so clearly need a dramatic overhaul of our broken, dysfunction, and often cruel health care system.

It ought to give the corporate execs bankrolling the anti-Medicare for All operation, the so-called Partnership for America’s Health Care Future, funded by the biggest trillion-dollar pharmaceutical, insurance, and hospital corporations, nightmares.

When they read some of the responses, or other regular reports on social media, they might want to change their name to Partnership for American’s Health Care Past.

“When a good family friend died of Type 1 diabetes leaving 5 young kids fatherless, because he worked two jobs as an independent contractor, and neither gave him health insurance, and no private insurance would accept him with diabetes. He never told us he couldn’t afford insulin.”

“When my employer told me I needed to come back to work or else my families health insurance would lapse. I took that phone call while sitting in a PICU room next to my 4 year old who was in a medically induced coma.”

“Watching my best friend’s father go from serene acceptance of his lymphoma diagnosis to shame and despair on his deathbed two years later that his treatment had permanently impoverished his wife and son. When my father received his own diagnosis, he refused all treatment instead.”

“When my best friend couldn’t afford a doctor — her employer had her work 38 hour weeks to avoid “giving” her healthcare — & when the pain got unbearable, she went to the ER, was admitted & diagnosed w/now-advanced cancer, & died. The hospital sent her grieving mom a bill for $80K+.”

“The only reason I’m still alive is my mom and sister shelling out the money for an infection that started in my wisdom tooth, and became blood poisoning. I was, and remain, uninsured.”

“When my mom died of colon cancer because she waited to go to the hospital because she didn’t have health insurance. She was stage IV by the time she found out. Now, she is a statistic.”

“When my mother waited too long to go to the doctor when she found a breast lump. Being poor cost her life.”

“My father killed himself so he wouldn’t bankrupt the family trying to treat his Parkinson’s. He was my best friend. We did a Go Fund Me for his medical care and ended up using it for his funeral.”

Messages like this are provoking fear in the health care corporate board rooms. Signs of their alarm are evident in massive lobbying of Congress to support Medicare for some alternatives, hefty campaign donations to key players on key committees, and other political bullying.

The profiteers of pain probably also noticed some chilling new data, such as the study from the American Cancer Society that found 137 million U.S. adults have suffered due to exorbitant medical costs.

Or the report in the Los Angeles Times May 2 that one in six Americans who have employer-paid insurance made “difficult sacrifices” last year, such as cutting back on food, using up all or most of their savings, getting extra jobs, or moving in with friends, to be able to pay un-payable medical bills.

But it’s likely not just stories and findings like these that probably keep the CEOs up at night, it’s also the massive movement on the ground.

Since a week of mass movement building organizing meetings (barnstorms) in February, a National Nurses United grassroots campaign has been hosting canvassing and phonebanks across the U.S. at a rate of 150 a week.

They have generated thousands of person-to-person conversations that have resulted in well over 10,000 calls to legislators to support Medicare for All bills, especially the House bill, HR 1384, co-sponsored by Reps. Pramila Jayapal and Debbie Dingell that just had its first wildly successful hearing in the House Rules Committee and, as a result of mass pressure, will soon be the focus of a hearing in the House Ways and Means Committee.

The corporate bosses might also have noticed another popular meme on social media — it shows a lonely person with a broom sweeping the beach trying vainly to hold back the tide. It’s coming, and we won’t be stopped.