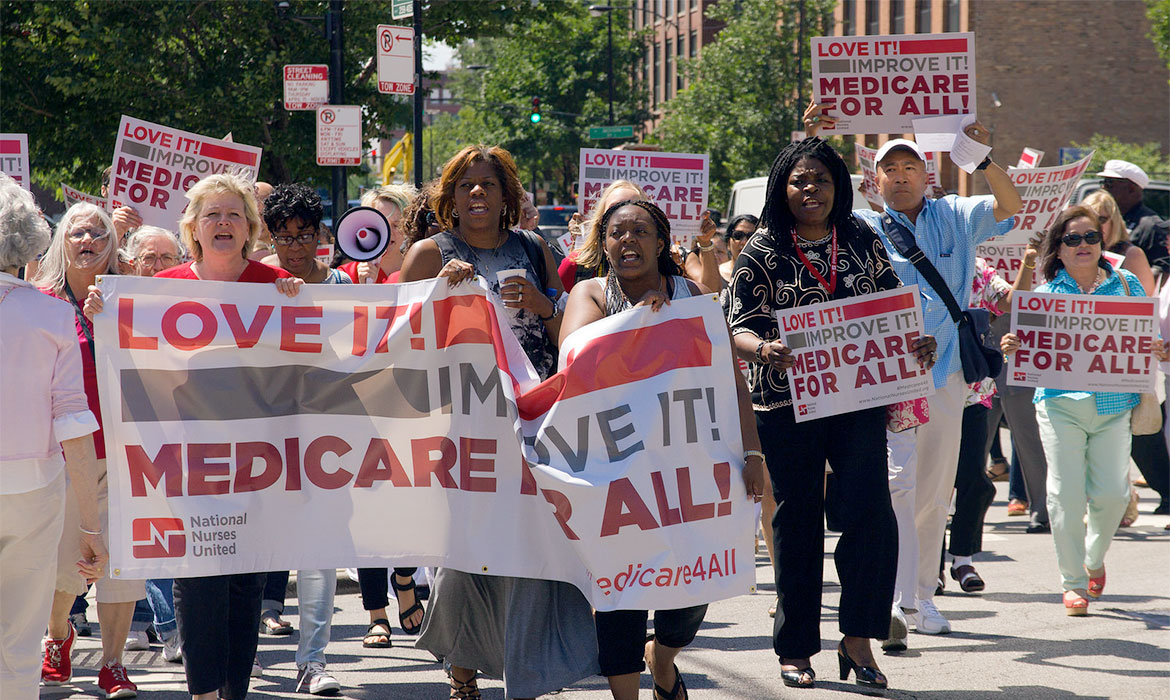 The United Kingdom’s National Health Service (NHS) turns 70 on July 5, an anniversary marked by a people’s movement to demand that the under-attack NHS be free, for all, forever.  Nurses in the United States know our fight forward to Medicare for all aligns with the grassroots fight in the U.K. to say, “We can never go backward.”

As the last week of June has drawn to a close, thousands of people in the U.S. and the U.K. have taken to the streets, demanding guaranteed healthcare for all, as a human right.

On June 22–24, National Nurses United, the largest union of registered nurses in the U.S., played a leading role in the Single Payer Strategy Conference, a major national convergence of workers, patients, grassroots activists and everyday people, marching through Minneapolis to demand, “Medicare for all, now!”

Hundreds of #SinglePayer activists are marching in the streets of Minneapolis, Minnesota!#MedicareForAll is more popular than ever! Union nurses from across the country have teamed up with @HCNow to lead the fight for universal healthcare ??#UnionStrong #PoorPeoplesCampaign pic.twitter.com/uL5KlxXLwq

Just days later, on June 30, thousands of people in the U.K. marched through London, on the eve of the National Health Service (NHS)’s 70th anniversary. Marchers demanded the NHS remain “free, for all, forever,” in the face of attacks on the system by corporate interests seeking to profit off of what has been, and should remain, a public good.

These marches took place on different countries with very different healthcare systems, but the footsteps of those taking part fell with unified purpose. While U.S. activists are moving forward, toward a health care system that belongs to the people, U.K. residents are saying there is no going backward to a time before the existence of just such a system, which provides care based on patient need and public health, not on ability to pay.

As we celebrate our NHS’s 70th birthday, thousands have come to Downing Street to remind @Theresa_May that we will always fight for healthcare as a right for all, not a privilege for those who can afford it. #OurNHS #NHS70 pic.twitter.com/Ji0GLh0rVe

The NHS certainly has a lot to celebrate, given that the countless lives healed and saved in its seven decades of existence prove that humane healthcare is possible — despite the fact that U.S. nurses and our allies are constantly told by corporate mouthpieces that such a system is unaffordable, too complicated, not achievable at this time.

Nurses, more than anyone, are keenly aware that our own country’s failure to establish a humane healthcare system has deadly consequences. Every day, at the bedside, we bear witness to patients like Single Payer Strategy Conference speaker Rebecca Wood, whose lifelong pain from a debilitating jaw infection is the result of delaying her own care in order to cover her infant daughter’s healthcare bill. When our patients must choose between paying for rent or paying for lifesaving treatment, RNs bear witness to the fact that the end result of not having healthcare is human suffering and the loss of life.

“27 days after Alec Smith lost his insurance, he DIED alone in his apartment.

Not having insurance kept him from coming to the hospital. We could’ve saved his life”

U.S. nurses will never give up on our fight for guaranteed healthcare for all as a human right. It’s increasingly what the people demand — with 63% of U.S. registered voters in a recent survey supporting Medicare for all. And on the eve of its 70th anniversary, we would like to thank the NHS for fueling our will to keep fighting forward, given the NHS’ proof that calling a shift to need-based care “impossible” is wrong.

The NHS has shown us that it is possible to provide a high standard of healthcare without outrageous co-pays, premiums and deductibles, in a system that belongs to the people.

And we know that the NHS is only possible because of working people, just like us, who spent years organizing and campaigning to bring it into existence, and to defend it now. As the Labour Party’s Nye Bevan said, “The NHS will last as long as there are folk with the faith left to fight for it.”

U.S. nurses know the people of the U.K. must keep fighting to protect what they have, as continued attacks on the NHS seek to mask the same, old, tired issues we face here in the U.S. — underfunding by a government moving toward privatization.

“An NHS in crisis, people are dead!!!!! this Tory Govt should be charged with gross negligent manslaughter and thrown in jail”@PeterStefanovi2 on #OurNHS70 yesterday pic.twitter.com/zPI7DY2Os7

In a decade of austerity, and top down reorganization (enabling private firms to take over running various aspects of the NHS), as the system is stretched to a breaking point, U.S. nurses have a message for the working people of the U.K.:

We stand in solidarity with you.

On June 30, when a wide range of union and grassroots groups marched through London, with their “NHS: Free, for all, forever” message, National Nurses United was also there in spirit.

“The NHS offers hope to all of us as nurses, we heal & provide comfort to those in need and that’s just what the NHS does the NHS has protected the citizens of the United Kingdom for these 70 years” – Solidarity from Bonnie Castillo @NationalNurses #Free4AllForever#NHS70 pic.twitter.com/fB1Vd2LTEY

Nurses are immensely proud of the devoted people who organized and fought for the NHS, and 70 years later, we are with them in their fight to save and protect it, just as we know they are with us until we achieve guaranteed healthcare for all. And we will achieve it; nurses never give up.

Working people cannot just depend on our elected officials to put public health over private profit. It’s up to all of us to use our collective voice, and our willingness to take to the streets, to demand what is moral and just.

And together, on behalf of patients everywhere, we will win.

— Bonnie Castillo is the Executive Director of National Nurses United, the largest union of registered nurses in the U.S.

‘I can’t afford that’: A viral tweet shows why we need Medicare for all