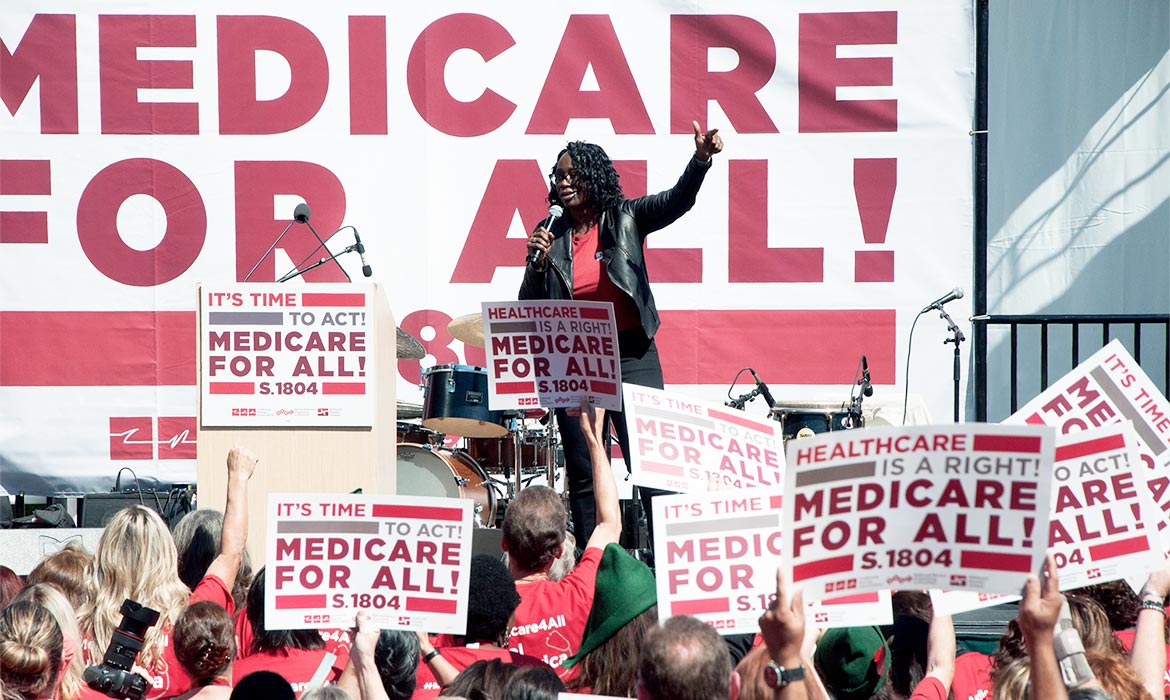 “We’re going to push the Democrats to do it. There is absolutely, unequivocally no excuse for the Democrats not to support Medicare for All.”

Wasting no time getting to work on the most popular, cost-effective, and morally necessary remedy to America’s disastrous for-profit healthcare system, National Nurses United hosted a post-midterm Medicare for All strategy call Tuesday night during which prominent single-payer champions like Sen. Bernie Sanders (I-Vt.), Rep. Pramila Jayapal (D-Wash.), and Our Revolution president Nina Turner discussed how to build on growing grassroots momentum for universal healthcare and detailed plans to pressure the entire Democratic caucus to sign on to “an idea whose time has come.”

“We’re going to push the Democrats to do it. There is absolutely, unequivocally no excuse for the Democrats not to support Medicare for All,” said Turner, who called Medicare for All “a moral imperative” that also happens to be far more economically viable than the current privatized healthcare status quo.

Highlighting recent surveys that show Medicare for All has the support of 70 percent of Americans—and 52 percent of Republicans—Sen. Sanders declared that “we have got to end the international embarrassment of the U.S. being the only country on Earth that does not guarantee healthcare to all as a right.”

“This is not gonna be an easy fight. You’re taking on the drug companies, the insurance companies—and these people have unlimited money. They buy and sell politicians,” continued the Vermont senator, whose Medicare for All bill currently has 15 Senate co-sponsors. “We have the American people behind us and we’re gonna win this fight, but clearly we’re gonna need an enormous amount of grassroots power to make it happen.”

“The really good news is that we are being attacked almost daily, and we should be proud of this…the reason they’re going after us is that they read the same polls that I read. The last two polls I’ve seen have about 70% (supporting #MedicareForAll).” —@SenSanders

Medicare for All has rapidly exploded in popularity over the past two years thanks to tireless organizing by nurses, physicians, progressive organizations, democratic socialists, and concerned citizens as well as Sanders’ 2016 presidential campaign, which placed single-payer at the center of attention on the national stage.

Following last week’s midterms, an estimated 12 new Medicare for All supporters are set to join the House of Representatives, putting the number of single-payer advocates in the House over 130.

Here’s who has cosponsored HR 676, the #MedicareForAll bill, in the House: https://t.co/EJFli8E1V2 If you have a Democratic Rep & they’re not on here, shame them & primary them.

There are 13 Democrats on key committees for passing improved and expanded #MedicareForAll who have not co-sponsored #HR676. If even half of them get onto HR 676 we have a real shot at passing guaranteed healthcare for all.

We need thousands of calls to pressure them to sign on.

In addition to discussing legislative plans for Medicare for All in Congress, the strategy call also centered on grassroots efforts to build support for single-payer at the local community level, where the pain of obscene insurance and prescription costs are felt most profoundly.

“We will work with the growing House Medicare for All caucus to press for action on Medicare for All, while also continuing to escalate movement building in states from coast to coast in support of HR 676,” said Bonnie Castillo, executive director of National Nurses United.

Giving business a break with Medicare for all