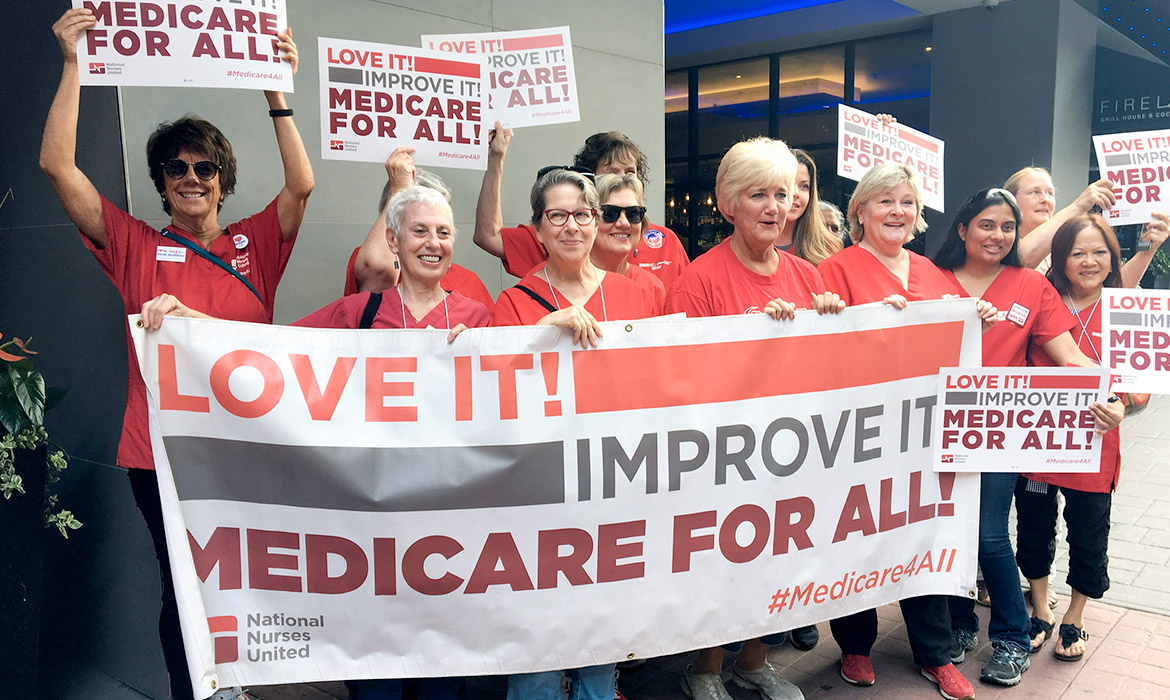 Efforts by the Koch network linked Mercatus Center to undermine the growing movement for Medicare for all only illustrate why Medicare for All is the only real solution for an escalating health care crisis in the U.S.

That’s the conclusion of National Nurses United (NNU) which emphasized that even the Mercatus-sponsored study concedes that a Medicare for All system, as proposed by Sen. Bernie Sanders, would actually save tax-payers $2 trillion in current health care spending over ten years.

“Health care costs, even for those who have health insurance, are endangering tens of millions of people every day in this country,” noted NNU co-president Jean Ross, RN.  “What even this corporate-funded study concedes is that we can actually guarantee health care for everyone in this country, without the devastating, rising costs of premiums, deductibles, and co-pays – at less than we spend as a nation today on health costs.”

NNU endorsed the statement by Sen. Sanders to the Washington Post that under a Medicare for All health care system “a family of four that is spending $28,000 a year for health care today will no longer pay premiums, co-pays or deductibles to private insurance companies.”

“If every major country on earth can guarantee health care to all and achieve better health outcomes while spending substantially less per capita than we do, it is absurd for anyone to suggest the U.S. cannot do the same,” Sanders told the AP.

Ross cited recent studies that nearly six in 10 people worry about the cost if they suffer a major illness or accident, and that 40 percent of people have told researchers that in the past year they skipped needed care, from doctor visits, to critical medical treatment, to filling prescriptions, due to the high out-of-pocket costs, which are skyrocketing every year.

The far right, like the Koch network and centers they fund, such as Mercatus, NNU notes, have an agenda to discredit government support for social programs that help people, such as health care – and are especially alarmed at the rise of public support for publicly financed Medicare for all as the current profit-focused health care system continues to unravel.

That was undoubtedly the goal of the Mercatus-sponsored study. But while succeeding in grabbing some media headlines over the projected 10-year cost of a Senate bill introduced by Sen. Sanders they could not hide the fact that Medicare for All would save money and ensure everyone can get the care they need.

It’s the same tactic used by opponents of a proposed Medicare for All/single payer bill introduced in California last year – inflating public concerns about budget costs (while in the California bill case, ignoring the substantial savings it would accrue).

“All the fear mongering over Medicare for All cannot hide the reality of the pain and suffering faced by millions of our neighbors and family members who are making the painful choice of whether to get the health care they need and face financial ruin, or get care and cut other basics like housing, heating, or food costs for their loved ones,” said Ross.

“In other words, we have the resources to do the right thing, and make the health of our people and our nation the priority it deserves to be. It’s a question not of cost, it’s a question of political will,” Ross said.