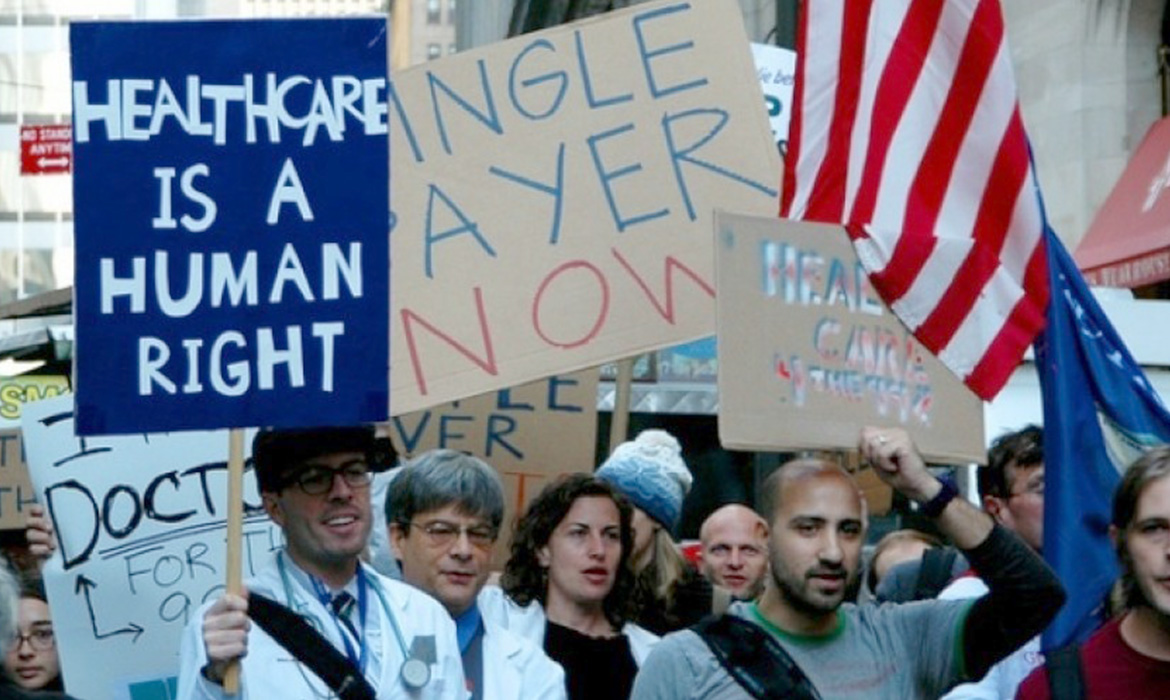 If there is one defining symbol of how horribly broken our health care system is, this is it: One-third of all GoFundMe campaigns are created to pay for medical expenses, a stunning 250,000 campaigns that have raised an astonishing $650 million, CBS recently reported.

What’s behind this appalling portrait of tens of thousands of families having to beg for help to pay for critically needed care? A morbidly named concept branded as, “Skin in the Game.”

The twisted thought is that requiring patients to pay up front through premiums, deductibles, and co-pays before they can walk in the door, will discourage patients who supposedly over utilize the system if not confronted with punitive out of pocket costs.

As if undergoing invasive medical treatment or diagnostic procedures, or enduring long waits in Emergency Rooms or doctor’s offices is somehow an enticing experience.

However, the volume of patient services, whether hospital stays, office visits, tests, or prescription drugs, is no greater in the U.S., and sometimes less, than in other highly developed nations.  The U.S. vastly outspends the rest of the world not because of patient over use, but because prices are so much higher – to the benefit of the mammoth health care corporations at the enormous expense of everyone else.

Rather than reign in this corporate hijacking of our health, policy wonks and politicians of both major parties, typically funded by the healthcare industry, shift the blame and the cost to patients and working people generally.

“Skin in the Game” is hardly a new concept.

Requiring patients to pay a portion of the cost was part of the design for Medicare. “That keeps your hypochondriacs out,” President Lyndon Johnson reportedly agreed when presented with the plan by his staff – a dubious decision that opened the door to predatory health care corporations to carve out chunks of the system for profits to the detriment of many seniors and others dependent on Medicare or Medicaid.

“Skin in the Game” was baked into subsequent health care proposals- and became a central component of the Affordable Care Act, not surprising since the drug companies, insurers and hospitals were handed the first seats at the table in designing the ACA.

It was their disastrous scheme to control costs by gouging individuals and families. Rather than cracking down on industry profiteering that that slammed millions of patients and families with outrageous medical bills, like those starting GoFundMe appeals. It was also poor political strategy, helping spark the Tea Party attack on the ACA and the Democrats for passing it.

Even after witnessing the harm inflicted on millions by the escalating shift of costs for care onto patients rather than the corporations that profit off sickness, and how it undermined popular support for the ACA, a number of reform advocates, even those who favor Medicare for All, continue to endorse the idea of “Skin in the Game.”

Nurses, who every day see patients struggling with debilitating costs, intuitively understand that saddling people with financial barriers to care is a fundamental contradiction to their expertly trained ability to provide care based on human need, not on how much material skin the CEOs want to peel off first.

Nurses believe that health care is a human right. It’s not a right if you are blocking people from getting care by erecting walls around it.

Here’s where “Skin in the Game” leads:

At least one in ten adults delay or forgo needed care entirely due to cost, a number that jumps to one in five for adults in worse health, and nearly one in three for people who have no insurance, the Kaiser Family Foundation just reported. The numbers are even higher for people skipping needed dental care, eye care, or filling prescriptions.

Numerous other surveys over the past year have documented how tens of thousands of families have been forced to respond for those who decide to get the proper care in the face of soaring medical costs.  They use up all their savings, or slash family costs for other basics, such as clothing, food, housing, or heating bills.

Or they delay payment only to be hounded by bill collectors for months or years, or go into bankruptcy, still major cause of personal bankruptcy and even homelessness. Then there’s people like the Arizona the couple that works five jobs between them to pay for medical bills.

Media reports have put scores of human faces on this calamity, one reason why health care was the top issue in the recent mid-term elections and why it is dominating the pre-2020 election landscape with the health care industry and its acolytes in full throttle trying to strangle the push for a Medicare for All solution that would eliminate this robbery.

It’s easy for the well-funded and well-fed to moralize and strategize about forcing people to pay and pay and pay for medical care, just to protect corporate profits or please your donors, rather than treating it as a basic right in a civilized society. But it’s not humane and never will be.