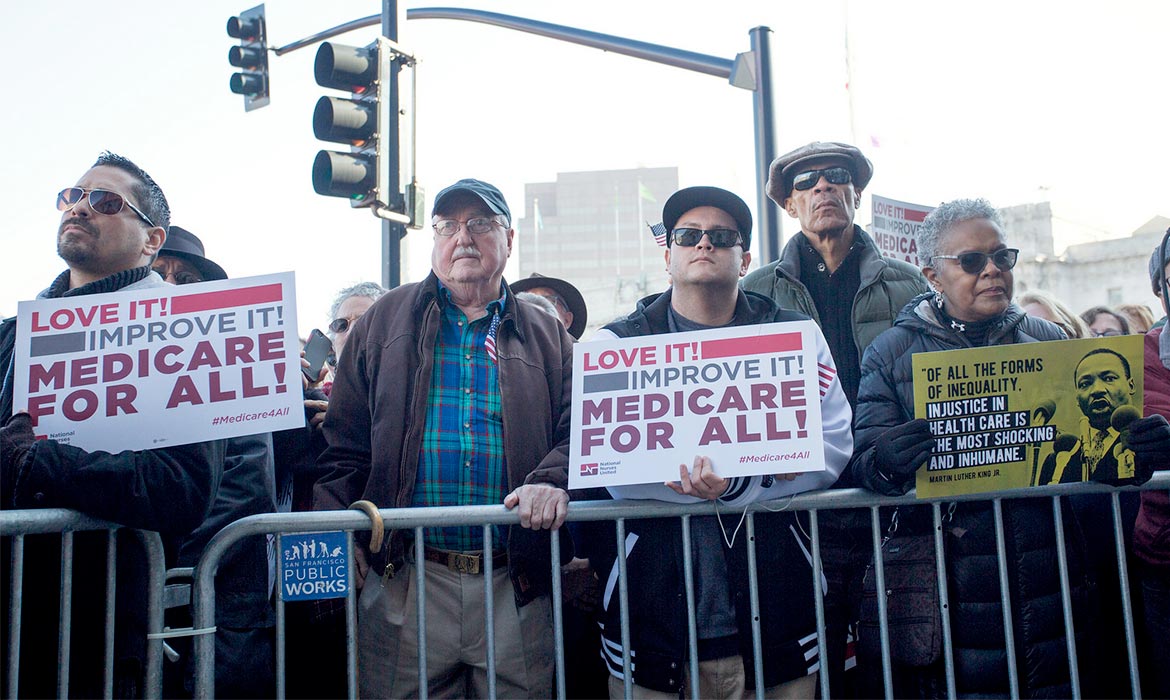 Behind all of the disheartening statistics found in the current for-profit system are real people, enduring pain and suffering that should be unacceptable in the wealthiest country on earth

Early in this new year, Rep. Pramilla Jayapal (D-Wa.) will be introducing an updated version of a House Medicare for All bill, buttressed by the election in November of a number of new Medicare for all House candidates. Re-introduction of a Senate bill by Sen. Bernie Sanders (I-Vt.) is also expected soon.

Nurses and other health activists are already gearing up to increase the number of co-sponsors, especially for the House bill, long known as HR 676, and push for action on the bill now that the Democrats will be in the majority again.

Hundreds of activists have participated in organizing, that will include barnstorming in early February for public events and to press Congress members who have not signed on to the bill. Both Jayapal and Sanders joined a national conference call, sponsored by National Nurses United, following the election, to promote the organizing campaign. A barnstorm is a mass organizing meeting to kick start action on Medicare for all in local communities.

Polls show growing national support, as much as 70 percent, 85 percent among Democrats, and even a majority of Republicans, for a publicly financed, guaranteed health care solution. Those numbers, which reflect widespread public anxiety over a dysfunctional health care system, and the election of more Medicare for All supporters, have spawned the formation of an alarmed industry sponsored effort to block the single payer movement.

But frequent news reports demonstrate why the need for Medicare for All will only continue to grow. Here’s a sampling just from the past month:

Four in 10 adults say they are living paycheck to paycheck and could not produce $400 in an emergency without sliding into debt or selling something, the Washington Post reported.

Medical bills from an unexpected illness or accident are the leading cause of financial emergency – a point emphasized in a Kaiser Health News article featured by NPR under the telling headline “Insured, But Indebted: Couple Works 5 Jobs To Pay Off Medical Bills.”

Uninsured rates rose by some 700,000 people, in 2017 in 36 states, even some that expanded Medicaid coverage through the Affordable Care Act (ACA), the Kaiser Family Foundation noted.

Trump Administration and rightwing attacks on the ACA are taking their toll. Escalating out of pocket costs are increasing the number of people who resort to buying high deductible plans with thousands of dollars in deductibles, huge co-pays for critical care such as emergency room visits and surgeries, and exclusion of coverage for prescription drugs or other basics.

Overall, KFF reported, about 4.4 million fewer people who buy coverage on their own were insured in 2018 compared to 2015, Most of the drop occurred among people who don’t get ACA subsidies which have not kept up with the rising costs.

Even people with employer-paid health plans are seeing their cost for premiums rising, according to a Commonwealth Fund study on top of earlier reports about the cost shifting by employers to workers as well in deductibles and co-pays.

While much of the focus has understandably been on costs to individuals and families, who frequently respond by skipping needed medical care, there is also rampant evidence of worrisome declines in health barometers as well as the ongoing racial disparity of a discriminatory system.

Average life expectancy in the U.S. declined in 2017 for the fourth year in a row, which the Washington Post noted was the “longest sustained decline in expected life span at birth in a century, dating back to the global flu pandemic of 1915-1919 that killed 50 million people worldwide including 675,000 in the U.S.

A subsequent Vox report made the significant addendum to the data that the decline is concentrated among middle and low income peoples while life expectancy has actually increased for the richest households. That’s predictable for a system structured on ability to pay, not patient need.

The inequality also extends to race and gender. The rise in the uninsured rate, for example, is much higher among Latinos and African Americans. Death rates linked to heart disease, diabetes, cancer, infant mortality, and HIV/AIDS at an early age are higher for African Americans than for whites, and black women are three to four times more likely to die in child birth than are white women.

Behind all of these disheartening statistics are real people, enduring pain and suffering that should be unacceptable in the wealthiest country on earth.

The most effective solution is not minor tweaks to the ACA, or any of the market-based proposals beloved by the conservative politicians and policy wonks which is the very reason for the crisis of a system even the ACA could not eliminate. It’s why public support for Medicare for All is swelling, and will surely be a major focus in the new year.