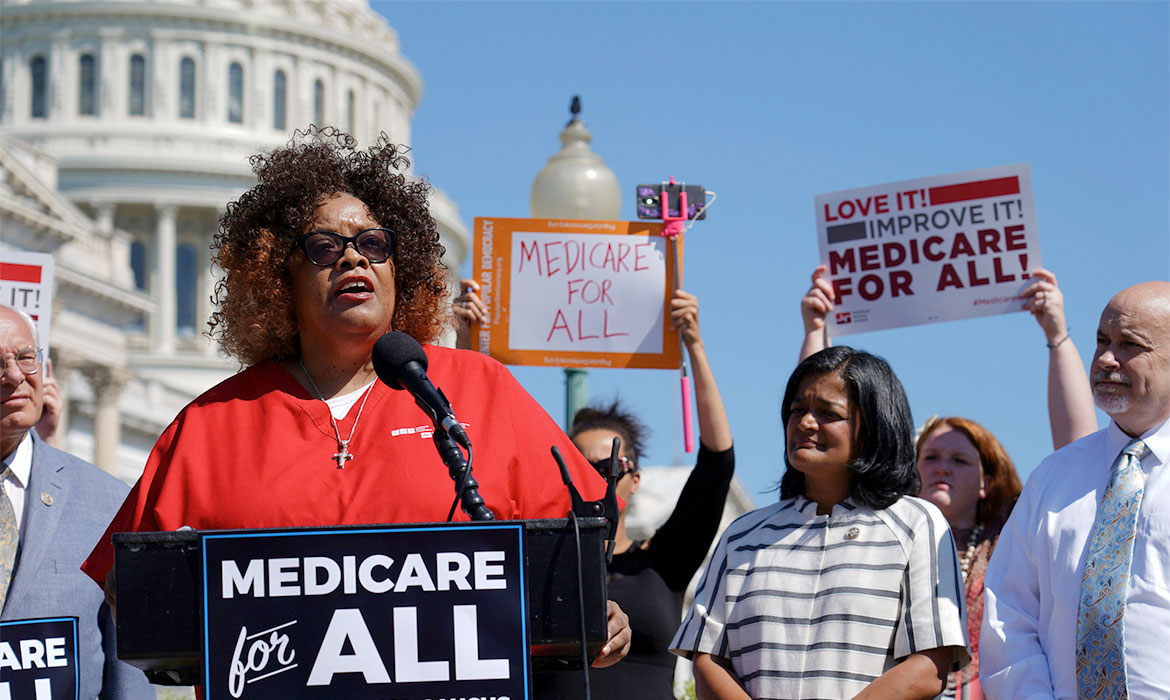 With just two weeks to go before the showdown mid-term election, a new survey by National Nurses United (NNU) reveals that in 52 percent of Congressional races, Democratic Party candidates across the U.S. support Medicare for All.

NNU released its findings as health care has become a critical issue for tens of millions of individuals who struggle with skyrocketing out of pocket costs and growing health insecurity. The issue takes on even greater significance with Senate Majority Leader Mitch McConnell threatening new federal cuts in Medicare and Medicaid and another vote to repeal the Affordable Care Act.

“Opinion polls show as many as 70 percent of voters want the substantive, comprehensive solution to our health care crisis that Medicare for all would bring. We’re enormously pleased to see Democratic candidates in a majority of House races endorse the reform that will guarantee universal care without the devastating costs that threaten so many families,” said NNU Co-President Jean Ross, RN.

NNU’s survey found there are 225 Democratic candidates, in 223 House races, who explicitly support Medicare for all, as based on their responses to NNU candidate questionnaires, website issue postings, news reporting, or if an incumbent whether they are a current co-sponsor of HR 676, the House Medicare for All bill.

“Electoral candidates’ increasing embrace of Medicare for All means the issue will be supercharged when the next Congress convenes,” said Robert Weissman, president of Public Citizen.

“But even more important,” said Weissman, “is why these candidates are embracing it – because an increasing majority of people, with increasing passion, is demanding that the United States end the rationing of health care with a Medicare for All system.”

“Improved Medicare for all means better health benefits at a lower cost for seniors. It would add vital protections, including hearing aids, vision care, and dental work while eliminating co-pays, deductibles and premiums,” said Nancy Altman, President, Social Security Works. “Medicare for all strengthens Medicare politically, making it harder for Mitch McConnell and other Republicans to cut benefits, as they are threatening to do. In contrast, the majority of Democrats are running on creating a country in which seniors no longer have to choose between buying groceries and getting the health care they need,” Altman said

Growing public support for Medicare for All, agreed Ross, is evident “in the desperate effort by President Trump and the Republican leadership to discredit it with wildly misleading characterizations and fabrications.”

“Yet more and more people are ready for fundamental change in our current broken, fragmented, costly system, and we’re seeing that reflected with a majority of House districts, including in what are considered ‘red’ states and ‘red’ districts where Democratic candidates have made it part of their campaign,” Ross said.

Post-election, said Ross, nurses and health activists, will “actively follow up with every elected official to hold them accountable to enact Medicare for All to protect our patients, our families, and our communities.”

Numerous surveys indicate health care stands as the most critical or one of the top two or three most important issues for voters heading into November.

“People have increasingly discovered that having insurance does not mean you can get the care you need, when you need it,” Ross notes.

Another Kaiser survey found that workers with employer-paid insurance have seen their average share of employer coverage has risen 65 percent, and deductibles have jumped 212 percent the past decade, both far exceeding wage growth.

“Nurses and health activists have campaigned for an improved Medicare expanded to cover everyone for many years.  We congratulate the candidates who are working to make this real health security a reality,” Ross concluded.