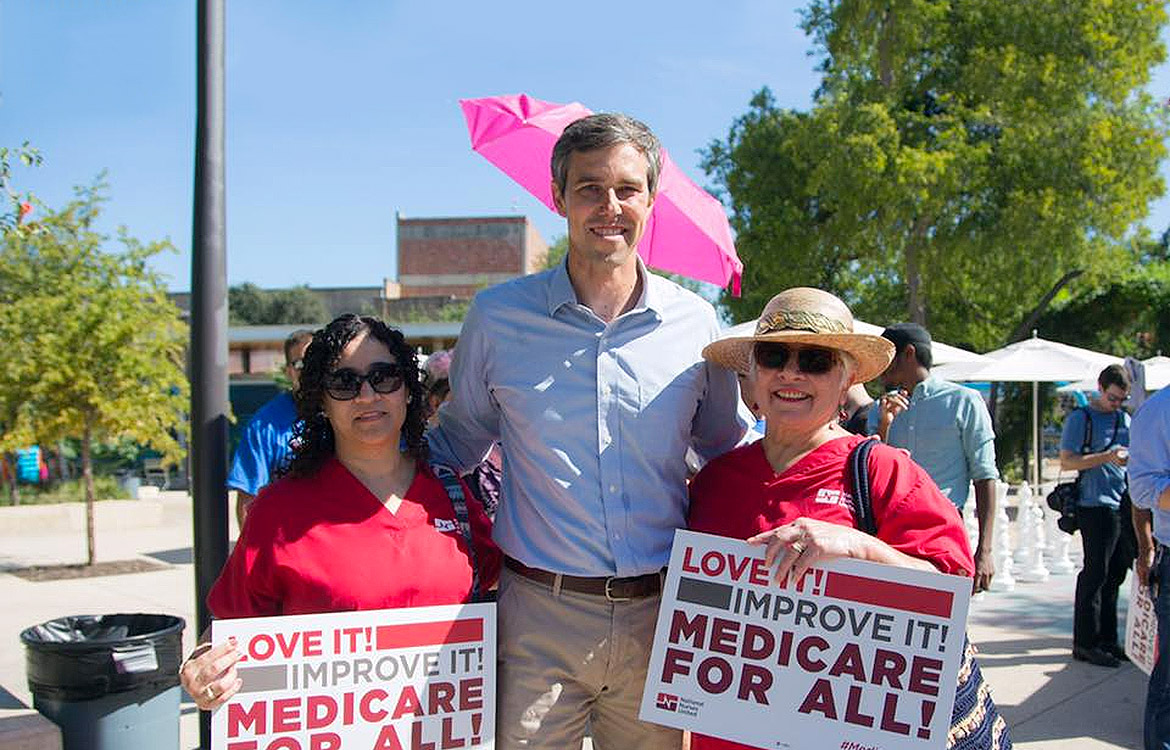 National Nurses United (NNU), the largest union of registered nurses in the country, today announced its endorsement of Rep. Beto O’Rourke in the 2018 Texas U.S. Senate race, given his strong stance on issues that positively impact public health and safety.

“From supporting Medicare for All, to supporting NNU’s federal safe nurse staffing bill, the 150,000 RNs of NNU, including our 3,000 Texas nurses, know Beto O’Rourke would provide the kind of leadership we need in the U.S. Senate to protect patients, nurses and our communities,” said NNU Co-President Jean Ross, RN. “We strongly endorse his campaign.”

Rep. O’Rourke aligns with nurses’ values on critical issues, including:

Championing Medicare for All: In Texas, 4.3 million residents, including over 600,000 children have no health insurance—a rate 1.75 times the national average.  Millions more are under-insured with deductibles and co-payments so high they cannot afford to use their insurance to seek needed medical care. Nurses know that astronomical health care costs and lack of access mean patients often do not receive treatment until it’s too late, or are forced to make devastating choices between paying for medication or paying for rent or food. Rep. O’Rourke joins NNU in supporting a Medicare for All health care system that will provide safe, therapeutic care for everyone as a basic human right, through a progressively financed, single-payer system.

“Every day, nurses have to watch our patients suffer and die simply due to lack of healthcare,” said Judy Lerma, RN, of San Antonio, Texas. “Beto O’Rourke understands that, regardless of ability to pay, every patient deserves a single standard of care, as a human right.”

In 49 out of 50 states, including Texas, healthcare corporations are legally allowed to maximize profits by cutting corners on staffing, with no set limit to how many sick or injured people nurses can be assigned at once. Studies have shown short staffing is detrimental to patients — and also to nurses (who experience higher rates of injury and job burnout). A 2016 study (Aiken et. al) found that with each 10 percentage point reduction in the proportion of professional nurses, there was an 11 percent increase in the odds of patient death.

“As a neonatal intensive care unit nurse, who cares for some of the youngest, most vulnerable patients out there, I know how important it is not to cut corners on staffing. Beto O’Rourke knows this, too, because he listens to nurses. One of the many reasons we need him in the U.S. Senate is that he will continue to be a champion of safe staffing limits, to protect nurses and patients across the country,” said Sandy Wakefield, RN, of El Paso.

Working to advance economic justice, the rights of working people: In an era of extreme economic disparity, nurses know that we need elected officials who value the health and safety of working people over the profits of corporations. O’Rourke believes workers should benefit from the economic growth they help create and promotes policies that encourage companies to focus on returning investments back to working people and the community.

Protecting the health and safety of our immigrant patients: Nurses care for our nation’s border communities, have firsthand experience treating immigrant patients, and are in many cases immigrants themselves—or the children of immigrants. RNs stand with O’Rourke in the commitment to end the militarization of our immigration enforcement system, and close private immigration prisons and detention centers that profit from locking up families.

The health of child detainees is especially concerning to nurses given that—in addition to the toxic stress experienced by detention and the still-lingering cases of family separation—immigrant patients may already have underlying health issues as a result of their stressful journey to the U.S. and from experiencing poverty and violence in their home countries.

“Beto O’Rourke stood with nurses, as we protested the inhumane separation of immigrant families, which can cause toxic stress and increase children’s risk for illnesses such as depression, diabetes, asthma, cancer and heart disease,” said Rio Grande Valley RN Laura Dominguez. “He stood up for what’s right, and nurses stand with him in his run for U.S. Senate. He cares for public health and safety as deeply as nurses do, and we need more of that in the U.S. Senate.”

Largest U.S. Nurses’ Union Praises Sen. Sanders’ for His Medicare for All Bill