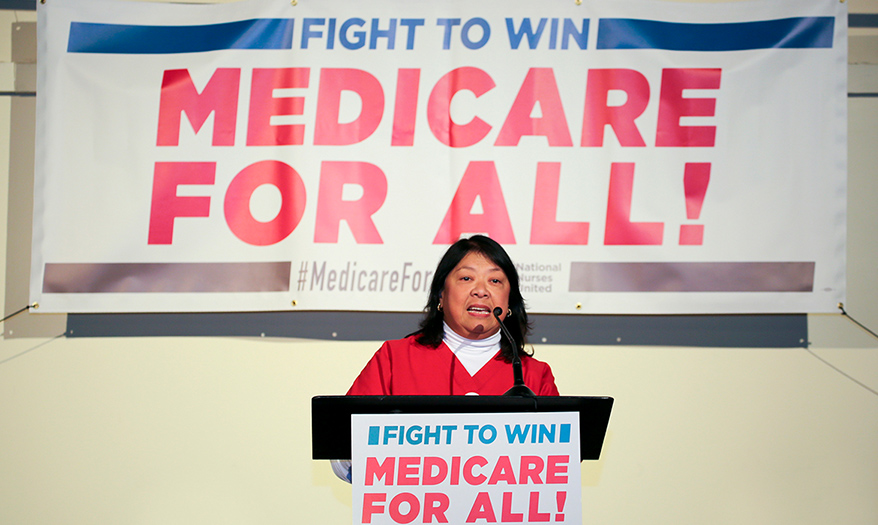 “Poll after poll has shown that the majority of Americans favor a Medicare for All, single-payer health care system over a profit-driven health insurance system. There are tens of thousands of volunteers across the country door knocking and phone banking in support of improving and expanding Medicare for All. The Medicare for All Act of 2019 (H.R. 1384) is backed by over 100 members of Congress and will guarantee quality health care for everyone – real patient choice, not the restrictions imposed by all private insurance plans, without devastating out of pocket costs. We nurses find the new legislation proposed by Speaker Pelosi’s office disappointing and totally inadequate to address the health care crisis confronting our country. Now is not the time for watered-down, incremental measures that will only put a Band-Aid on a broken health care system.”

“We urge Speaker Pelosi to put the full weight of the Democratic caucus behind H.R. 1384. Nurses demand a health care system that is based on patient need, not profits. At a moment when the Trump Administration is actively seeking to overturn the entire ACA, Democrats have an opportunity to show real leadership with the transformative change that will most protect all Americans. National Nurses United, along with our allies, will continue to build the grassroots movement for genuine health care justice and push to pass Medicare for All.”

To find a Medicare for All event in your Congressional district, click here.

To request an interview with Zenei Cortez or another NNU spokesperson, please contact Rebecca Sharer at rsharer@fenton.com or 703-585-0404.

National Nurses United is the largest union of registered nurses in the United States, with over 150,000 members nationwide.

Giving business a break with Medicare for all

Largest U.S. Nurses’ Union Praises Sen. Sanders’ for His Medicare for All Bill