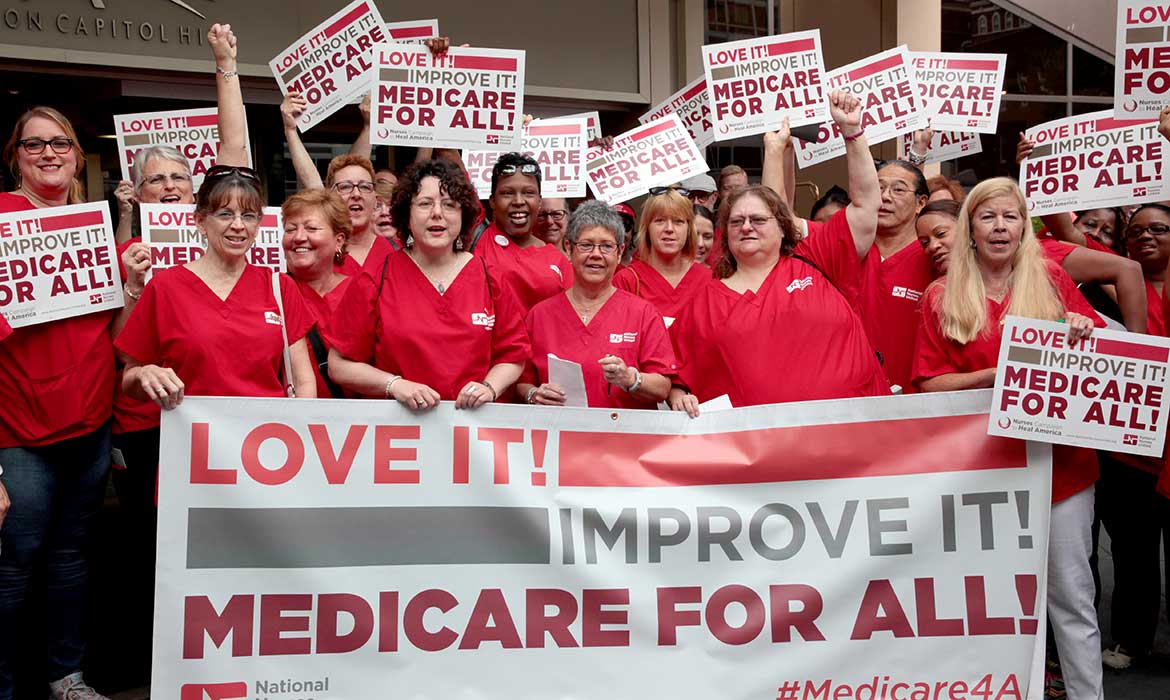 RNs are organizing an unprecedented, grassroots movement to back the new legislation

National Nurses United (NNU) announced its strong support for the new Medicare for All Act of 2019, introduced today by Representative Pramila Jayapal (D-WA), with backing from more than 100 members of Congress.

“As the largest union of registered nurses in the country, we could not be more proud of Rep. Jayapal for leading the way on this legislation that will change and save our patients’ lives. This bill is not only the most comprehensive Medicare for All act we have seen to date, but it is being introduced at a time when a majority of Americans are fed up with incremental tweaks to the current broken system and are demanding Medicare for All. It’s the right bill, at the right moment—and now we are organizing an unprecedented grassroots movement to demand that our elected officials support this legislation,” said NNU Executive Director Bonnie Castillo, RN.

“Today in America, 30 million people are uninsured.  40 million are underinsured. We have the most expensive health care system in the world and yet our outcomes are the worst of all industrialized countries. I and the more than 100 cosponsors of this bill refuse to allow this to continue.  It’s time to put people’s health over profit,” said Rep. Japayal, emphasizing that the bill “will cover everyone.”

The event will stream live here.

“Healthcare is a human right. We will need every single person in the country to help us, to stand with us, to organize and to fight for this,” Jayapal continued. “Because the industry lobby is going to pour hundreds of millions of dollars into killing this bill, saying it costs too much, scaring you into thinking you’re giving up something, pitting the healthy against the sick and the young against the old. It’s time to ensure that healthcare is a right and not a privilege, guaranteed to every single person in our country.  It is time for Medicare for All.”

Medicare for All Act of 2019 highlights include:

A recent Reuters-Ipsos poll showed 70 percent of respondents support Medicare for All, with 85 percent support among Democrats and 52 percent of Republicans supporting. According to nurses, who have for decades led the grassroots movement for Medicare for All, the next step is to continue growing support among the American public and to lobby representatives for the new bill’s passage.

In early February, National Nurses United sponsored Medicare for all “barnstorm” mass organizing meetings, across the United States, aimed at kickstarting action on Medicare for All in local communities. Over 150 events were held across the country, attended by 5,000 people—and resulting in 1,500 canvasses scheduled over the coming weeks. RNs say this surge of everyday people getting involved with knocking on doors and calling their legislators will continue growing the movement until the people’s will becomes the political will to pass Medicare for All.

“Our patients are paying for our current, broken system with their life savings—and their actual lives,” said NNU copresident Jean Ross, RN. “One third of all Go Fund Me campaigns are created to pay for medical expenses. It’s time for an end to the unconscionable choices are patients are forced to make, between paying for rent, food or medical care. The mass surge of public support for Medicare for All we’ve seen recently says that people across the country want real reform, now, and together, we will get this bill across the finish line.”