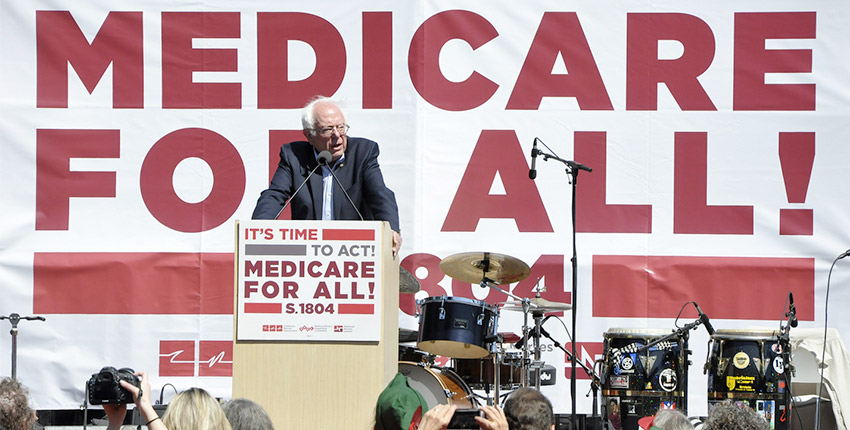 Isn’t Medicare for All politically unrealistic?

As a matter of fact, 70% of people support Medicare for All, with 85% of Democrats, 60% of Independents, and 52% of Republicans in favor of the concept, according the latest Reuters poll. Additionally, 77% of the 2018 voting public rate health care as their top issue as they go to vote.

I read Medicare for All (MFA) will cost so much more and is financially unsustainable.

Not true. Even a study conducted by the Mercatus Center, a conservative think tank, concluded that the U.S. would save $2 trillion over a ten year period by guaranteeing health care for everyone with Medicare for All. The United States spends 2.5 times the average of other industrialized countries, or an average of $11,193 per person annually, yet we don’t provide health care to everyone. Health outcomes such as infant mortality and longevity, and equality of access, are much better in other countries.

I heard we would be starting from scratch and it will undo the Affordable Care Act and Medicare.

Medicare is a popular, comprehensive health care program which has been in existence for 53 years. It needs improvements, such as adding dental and vision, plus the ability to negotiate fair prices for drugs. MFA would expand upon the current Medicare model to provide health care to everyone, from birth to death. In 2017 the regulations of the ACA allowed states to implement programs better than ACA-mandated services.

Won’t it raise my taxes?

A recent Commonwealth Fund study revealed that, under our current system of private insurance, 44% of insured adults reported not getting care because of high co-pays and deductibles. Sixty-five percent of personal bankruptcies are due to medical debt, and 75% of those were actually insured.

MYTH: Supporting Medicare for ALL is an “extreme left-wing” position.

FACT: A majority of people support a “single-payer’ National health plan, a number that increases when the policy is described as “Medicare for ALL,” climbing to over 60% in some polls. In California, for example, even after arguments describing the possibility of tax increases, 58% supported single-payer. Nationally, in the past year, polls from KFF, Politico, Reuters, and YouGov have shown more than half of individuals support Medicare for ALL, including two-thirds or more of Democrats, and a majority of independents. After the last presidential election, a Gallup poll showed 52% of Trump voters who earn under $30,000/year supported a federal guarantee of health care for all.

MYTH: Medicare for ALL would “dismantle the healthcare marketplace and destabilize the economy.”

Medicare for ALL is good for business and will give the U.S. a competitive advantage.

MYTH: Transitioning to single payer is too dramatic, complicated, and unwieldy.

MYTH: We need to implement cost containment measures before we transition to single payer.

FACT: The single most effective cost containment strategy is implementing a single-payer system
that would:

The Affordable Care Act (ACA) made history by expanding health insurance to millions of people for the first time. However, it left for-profit insurance companies involved in our health care system. For instance, even with the ACA, 30 million people are without coverage and 41 million are considered underinsured.

Join the movement to win Medicare for All!